Deciding to send Evie to nursery…

I have so much respect for single parents. No matter how much we love our children, there is no denying the fact that our little ones are tiring and exhausting. In fact, I am sat on the sofa with a glass of wine and half an Easter egg, and I thought that while I have some time I would write a post about ‘me time’, or the lack of it.

Once you have a baby, every waking minute of every day revolves around your family. Whether you have 2 hours’ baby free time and you’re trying to get through your little one’s ironing, or you’re lucky enough to get an entire day off and decide to go shopping for yourself, only to arrive home armed with half of the Next kids section, toddler Converse, baby food and NOTHING for yourself.

As Evie is 18 months now, I really REALLY want to get some aspect of my old life back. Not the late nights, hangovers or ‘Party Girl’ paparazzi photos in short dresses, but the things I took for granted before my family came along. Things like going to the gym, having time to shave my legs in the shower without having to jump out mid-way through to chase a toilet brush wielding Evie down the hallway before she decides to chew it.

Along with needing some ‘Me Time’, I have also felt like Evie needs a bit more mental stimulation. I’m sure if you are reading this and you are a full time mum you will understand that things can get stale. I often wonder “Has she got enough toys or is she bored?” We have taught Evie so much, about all of her animals, loads of words, simple household tasks she will now help us with; however, I think you will always have that guilt as a parent and thoughts of “Should I be doing more?” Combined with household chores, working, and all of the other weekly things that need doing, it feels impossible to give any more than we’re already giving.

I think Kelvin and I sat down one day and discussed moving forward, in regards to work, home and Evie. Not in an end of relationship kind of way, but just to find a resolution to the feelings that we had. As a couple we communicate really well, and I told him that I feel like I’ve lost myself and I’m not getting the opportunity to get the same kind of work or life satisfaction I have always had.

My family are my world, they will always be put first, but I think as being the one who stays at home the most with the baby you can almost resent your partner for getting some time to even go to work and be around other adults.

We came to a resolution to do this not only so we could spend some more time doing the things we liked without being constantly in a rush, but also to spend some more time together as a couple. We decided to enrol Evie into a nursery, and I have to say it was such a good decision. Before I went to look around the nursery with Evie I sort of thought it was just like babysitting- how wrong I was! The place is amazing; it’s like a mini school.

The staff there talked me through a typical day, and all of the things Evie would be doing and learning. Any worries I had soon went when I went to view the chosen nursery & realised she would be doing so much more at nursery than we could do with her at home, along with developing skills and socially interacting with other children her age. Evie is really smart, she learns things so quickly, but I feel like socially, when we’re out she is quite clingy with Kelvin, and I so we also wanted her to start to develop social skills and confidence around other people.

We chose a nursery called Busy bees, and since I mentioned it in a few posts on Instagram quite a lot of people have contacted me to tell me their little ones are also in Busy bees nurseries and that it’s a really successful national chain (I’ve just Googled it, and there are 344 nationwide!) I definitely recommend looking into your local one if you are considering sending your little one to nursery –  It has made me feel so happy to hear other people love it there too. I think it’s so important when choosing nurseries to speak with the staff, ask a lot of questions and spend some time watching the children. All of the tots there seemed so happy and engaged in the activities they were doing, and the staff were really taking time with each child. 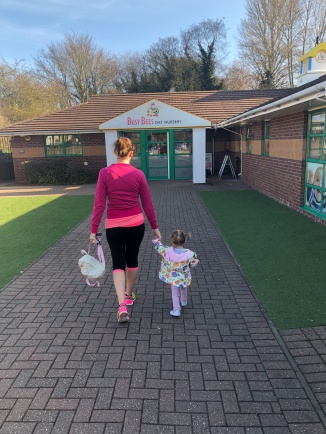 Evie has been there now a total of 4 full days- 2 days a week. Before this she did “settling in sessions”, which were a couple of hours each. At first I think she found it really difficult to be left there and had a few tears, which we were reassured was perfectly normal. I have noticed a massive difference in her already: she comes home jabbering little songs she’s learned, and in general I feel that she’s becoming much more confident and even more vocal than she was.

Overall, I honestly think it was such a good step to take as parents. I finally have some time back each week to focus on work, wedding planning, seeing friends and generally just that little bit of space we all need as parents, usually found wandering round supermarkets or cleaning the house – but now toddler free!!! 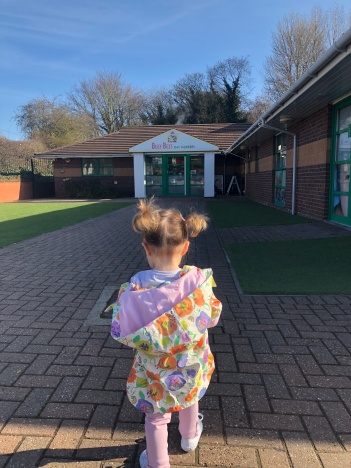